The one world foundation promotes cultural exchange and mutual understanding across borders. As a meeting place and space for creative exchange, artists and writers are offered an inspiring place to stay and a suitable studio for their work. Here, in the Art & Residencies programme, surrounded by palm forests, these creative individuals are given the opportunity to be inspired by encounters with both guests and locals.

Since 2009, the Galerie Krinzinger has been running an Artist in Residence Programme in cooperation with the one world foundation. A studio was built in 2009 on the former school grounds, where the school facilities of the one world foundation had existed until the tsunami in 2004. The programme was initiated in January 2010 and is now available as a workplace for the artists invited by the gallery.

Artists previously participating in the programme 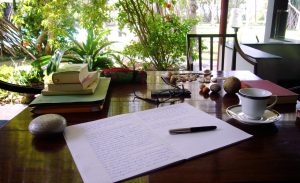 The one world foundation also offers a Writer in Residence Programme, sponsored by the Austrian Federal Ministry for Education, Arts and Culture. The Curator is Robert Menasse. Authors who work on transnational and trans-cultural projects, or who are interested in telling about the one world we all share – but do not necessarily know – are invited to three-month stays to write and develop projects.

Writers previously participating in the programme